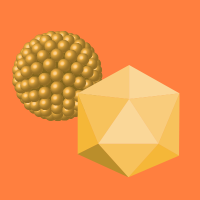 Emmanuelle Cameau is a Senior Bioreactor Applications Scientist within the Scientific Laboratory Services (SLS) at Pall Biotech. Highly skilled in the field of cell culture applications and with 10+ years of experience, Emmanuelle previously held positions as a Bioprocess Specialist at Pall, and a Biotech Process Sciences Upstream Process Development Engineer at Merck Serono. She received her Biotechnology Engineer diploma from the former Ecole Supérieure d’Ingénieurs de Luminy (now Polytech Marseille).

Joseph Capone has been a Senior Global Product Manager at Pall Biotech since 2014, with over 15 years industry experience in the upstream space. He has held various cross functional roles in marketing, sales and technical application, as well as a cell culture associate in a commercial manufacturing in a cGMP environment.

Q What is the current state of play in terms of the evolution of both adherent and suspension culture systems for viral vector production?

To circle back to the question of adherent versus suspension: transfection systems can be done in either suspension or adherent culture, while both the insect cell and packaging/producer cell systems are done in suspension. The majority of viral vector production still occurs in adherent cells, and we have seen strong movement towards using bioreactors for either adherent or suspension, as this provides greater control over batch productivity. This means you require less labor and less overall resources for upstream processing. Over the past 5 years, production has gradually shifted towards suspension cells – a trend which appears to have accelerated in the past 12 months. There is a still a space for adherent culture though. It remains the gold standard with at least two FDA approved drugs (Luxturna® and Zolgensma®) made using adherent systems. Zolgensma® requires large quantities of virus and the iCELLis ® bioreactor system is used to make this drug.

Q What are the pros and cons of each of the different expression systems?

EC: At the moment, more than 70% of clinical trials use transient transfection systems. This system is generally easy to get up and running, and can be scaled easily in either suspension or adherent mode. It suffers from the fact that the transfection process can be quite difficult to control, which can result in batch to batch differences in viral vector yield. It also requires plasmid DNA (pDNA) as an input, which is both expensive and sometimes in short supply. Despite these drawbacks, the relative speed to market it can provide will likely mean it will continue to dominate in coming years.

The Sf9 baculovirus system is well adapted to suspension culture, but can be quite challenging to get right, particularly the ratio of the different types of baculovirus. The baculovirus also has to be separated from the therapeutic virus, which can be a challenge. Additionally, there is some evidence that virus produced in insect cells is less potent than what we would get from mammalian cells.

Finally we have packaging/producer cell lines. Theoretically these cells should have the most consistency, as most of the genes requires to generate the virus are still integrated in the host cell genome. Viral vector production is stimulated by infecting with a helper virus which has to be separated from the therapeutic virus, as with the baculovirus system. Unfortunately, this system can take as long as 2 years to generate, with no guarantee of success at the end. This is simply too long in the gene therapy world.

Q What are the important advantages and limitations of the current state of the art in bioreactors for suspension and adherent systems?

EC: There is still a widespread industry belief that it is faster to bring a product to market if it is produced in adherent cells. This has been demonstrated with the very rapid development and approval of Zolgensma®, which is manufactured using the iCELLis® fixed-bed bioreactor. With the acceptance of the iCELLis® as a platform for adherent cell manufacturing, scale up and process intensification are made easier.

There is a perception that cost of goods would be lower for a suspension process, but this may not be accurate in practice. On average these cell lines produce less virus than their adherent counterparts, which in turn increases the cost per dose both in terms of cell line and plasmid raw material requirements.

Scalability of adherent platforms is limited, as the larger fixed-bed bioreactor is only 500 m2. On the other hand, a suspension bioreactor could scale up indefinitely, although many additional challenges are encountered when transfecting suspension cells at volumes greater than 200 L.

Overall, therapy developers need to weigh the need to get products to market as quickly as possible against the need to develop more productive expression systems. Unfortunately, these two objectives are often directly opposed – this is one of the major dilemmas facing the industry.

Q What are the key requirements and considerations for scalability?

JC: A representative scale down model is needed for upstream and downstream unit operations, whether in a fixed-bed or suspension bioreactor. Greater titer productivity must be obtained by identifying critical operating parameters and maintaining these conditions when scaling up.

It’s also vital to consider the cost of raw materials – particularly the amount of transfection plasmid required per batch using the bioreactor – and the ability to maintain transfection efficiency when scaling up. Technologies that enable a streamlined and reliable seed train at production scale are also important when focusing on scalability.

Q What potential impact can your choice of expression system have on downstream bioprocessing? How can you seek to minimize any negative repercussions?

EC: As we discussed above, if you’re using a helper virus such as adenovirus or baculovirus, these will need to be separated from the therapeutic virus, which is generally adeno-associated virus (AAV). There are large size differences between these viruses, so techniques such as filtration can be used, as long as the larger virus is in relatively low concentration. If the helper virus is in too high concentration the viral filter will clog, and alternative methods must be found to reduce the amount of virus prior to filtration. In packaging/producer cells, where the helper virus and therapeutic virus are produced 1:1, another virus removal step must be introduced prior to filtration, using methods such as chromatography.

There are also implications for the early part of the downstream process; a recent study we performed has shown that different clarification strategies are required depending on whether the virus is manufactured in adherent or suspension format [1].

Q What about cost? How do the available expression systems compare?

EC: The cost of transient transfection systems is primarily driven by the cost of pDNA. For packaging/producer cells where no pDNA is required, batch costs can be significantly cheaper. However, the delay in getting product to market caused by moving to a packaging producer cell generally means these are not currently favored.

There may be some cost advantages to using an adherent system compared to a suspension system, given that pDNA is used more efficiently. Another recent study we performed showed that there are clear benefits to moving away from flatware systems and into bioreactor systems [2]. The study also showed that in some conditions, there are potential cost benefits to adherent methods.

JC: In the upstream space, the iCELLis® bioreactor has become the most widely accepted technology for the manufacture of viral vectors in an adherent sub-platform. Both the bench-scale iCELLis® nano bioreactor and production-scale iCELLis® 500 bioreactor have undergone recent improvements to their vessel design, software, hardware, and automation. For an adherent cell seed train, Pall also supplies the Xpansion® multiplate bioreactor.

The iCELLis® bioreactor system is an automated single-use fixed-bed bioreactor providing excellent conditions to manufacture high quality viral vectors. It is linearly scalable up to 500 m2; equivalent to greater than a 1000L bioreactor. We also have a robust and secure supply chain associated with the iCELLis® to service the installation base of more than 130 systems. Furthermore, the iCELLis® Nano provides a scale down model to the iCELLis® 500, and consists of an install base of over 400 systems globally.

To accommodate suspension cell platforms, Pall has the Allegro™ STR suspension bioreactor portfolio. This is available in sizes ranging from 50 to 2000 L. The Allegro™ STR range has been designed with enhanced usability in mind: its novel cubicle design concept allows for quick and easy installation, while maximizing mixing efficiency and mass transfer to optimal performance. We have shown the ability to culture insect cells to ~7×106 cells/mL in the Allegro™ STR [3]. To round out the upstream offering, Pall also has an Allegro™ XRS rocking platform bioreactor that is available to support a seed train from 2 to 25 L.

In the downstream space, Pall has the MVP system, and multiple filtration media available for product clarification. The Mustang® Q anion exchange membrane chromatography technology, has been proven effective at purifying both adeno and lentiviral vectors.

We therefore feel that in both the upstream and downstream space, Pall has the ability to provide technologies to support key challenges in gene therapy suspension and adherent applications.

Contributions: All named authors take responsibility for the integrity of the work as a whole, and have given their approval for this version to be published.Acknowledgements: None.Disclosure and potential conflicts of interest:The authors declare that they have no conflicts of interest. The authors are employees of Pall Biotech.Funding declaration:The authors received no financial support for the research, authorship and/or publication of this article.

This article is part of the Vectors channel, Suspension Culture Methods edition