TRENDS AND ADVANCES IN GENE THERAPY DELIVERY AND GENE EDITING

The number of advanced therapy medicinal products (ATMPs) to treat inherited genetic disorders is in constant growth, with a global 32% increase in new clinical trials in the last 4 years. ATMPs have demonstrated their success with already more than ten approved for commercialization. The success of AAV as the most promising viral vector for gene therapy is due to low immunogenicity, broad tropism and non-integrating properties. One major challenge for translation of promising research to clinical development is the manufacture of sufficient quantities of AAV. Transient transfection of suspension cells is the most commonly used production platform, as it offers significant flexibility for cell and gene therapy development. However, this method shows some limitations in large scale bioreactors: inadequate transfection protocol, reduced transfection efficiency and lower productivity. To address this concern, we present data on the novel transfection reagent FectoVIR®-AAV specifically developed to bring flexibility of transient transfection together with scalability and speed to market.

Gene and gene-modified cell therapy treatments have demonstrated their potential in addressing unmet medical needs across a wide variety of human diseases, including cardiovascular, neurodegenerative, ocular, immunologic disorders and cancer. These therapies are based on the delivery of corrective DNA (DeoxyriboNucleic Acid) into target cells with viral vectors. These viral vectors can either be directly administered to patients, referred to as in vivo therapy, or first administered ex vivo to cells isolated from the patient (autologous therapy) or from a donor patient (allogenic therapy). Based on the Alliance for Regenerative Medicine’s 2019 annual Report, the number of approved gene therapy products has grown with the approval of two additional gene therapies for distinct indications (Zolgensma® for spinal muscular atrophy and Zynteglo® for beta thalassemia), and the number of gene therapies is expecting to double within the next 2 years [1]Alliance for Regenerative Medicine Q3 2019 Data Report: https://alliancerm.org/publication/q3-2019-data-report. The two viral vectors that are mostly used for gene and gene-modified cell therapy are recombinant adeno-associated virus (AAV) and lentivirus (LV). AAVs have particularly shown to be interesting because they are efficient for gene delivery to specific cell types, such as motor neurons (ex. Zolgensma®) and retinal cells (ex. Luxturna®).

Production of AAV viral vectors generally requires the co-transfection of three plasmids, with the first containing genes coding for the capsid proteins and necessary auxiliary genes, the second harboring the therapeutic gene of interest, and the third corresponding to the adenovirus-derived helper plasmid. These plasmids need to be delivered into mammalian cell lines, mostly human embryonic kidney 293 (HEK-293) cell lines and derivatives, which will be the host to synthesize recombinant AAV viral particles containing the therapeutic gene. The efficiency of the delivery process is essential to obtain a high number of producing cells. This delivery process is mainly dependent on the transfection method used. Transfection should ensure that plasmids are co-delivered into the highest number of cells and that the plasmids are protected from degradation before reaching the nucleus. In addition, the transfection method should be scalable and highly reproducible in order to support large scale viral vector manufacturing.

The new challenge is now to develop production platforms that are capable of answering the growing needs for commercial manufacturing. Current conventional methods for virus production are based on adherent cell culture systems in the presence of serum, which are suboptimal set-ups when the aim is to put in place a validated manufacturing process to produce at large scale reproducible viral yields. Based on the manufacturing process adopted for protein and antibody manufacturing, the growing tendency among AAV viral vector manufacturers is to move on to suspension producer cells grown in chemically defined synthetic medium. By switching to suspension cell culture systems, the aim is 3-fold: reduce batch-to-batch variability by eliminating fluctuating parameters of cell culture (e.g. serum, cell seeding density), simplify downstream harvesting and purification processes, and increase AAV production to treat larger group of patients.

Transfection whether at small or large scale is dependent on the efficiency of the delivery molecule. As such, it is essential to identify a delivery molecule that is optimal for a given application. For AAV viral vector production in suspension cells, we screened a refined chemical library with specific criteria: scalability and improved production yields. These additional physico-chemical specifications were also essential to retain FectoVIR®-AAV as lead candidate: animal-free, scalable synthesis and GMP-grade compatibility. In comparison to the gold standard PEIpro® and other competitors used for viral vector manufacturing, FectoVIR®-AAV improved significantly rAAV2 production yield in suspension cells with up to 10-fold increase in functional titer yields (Figure 1

Improvement in both viral genome production and packaging efficiency with FectoVIR®-AAV results in a up 10-fold increase in functional rAAV-2 production in comparison with competitors. Suspension HEK-293T cells were transfected with PEIMax, PEIpro® and FectoVIR®-AAV using the recommended conditions. rAAV-2-GFP were harvested 72 h post-transfection of suspension HEK-293T cells with FectoVIR®-AAV/DNA complexes prepared in several synthetic media. Functional viral titers (TU/ml) of rAAV2-GFP were measured in an infectivity assay 72 h post-transduction of adherent HEK-293T cells: a serial dilution of harvested rAAV2-GFP is used to infect a given number of adherent HEK-293T cells. Three days post-transfection, the number of GFP-positive cells is measured by flow cytometry.). The increased production yield is reproducible at different scales, for the production of several AAV serotypes as confirmed by viral manufacturers who took part in the beta-testing. In addition, several of the most frequently used synthetic media for AAV manufacturing were also tested to prepare FectoVIR®-AAV/DNA pre-mixing complexes. As shown in Figure 2

FectoVIR®-AAV is compatible with several commercially available synthetic media for suspension HEK-293 cells.Recombinant AAV-2 were harvested 72h post-transfection of suspension HEK-293T cells with FectoVIR®-AAV/DNA complexes prepared in several synthetic media. Functional viral titers (TU/ml) of rAAV2 were measured in an infectivity assay 72 h post-transduction of adherent HEK-293 cells as follows: genomic DNA was extracted from harvested rAAV2-GFP using a viral DNA extraction kit. The number of viral copies was determined by the SYBR-green qPCR method using primers specific for inverted terminal repeat regions (ITR)., FectoVIR-AAV® offers the flexibility that is needed during process development as it is compatible with the recommended synthetic media, as well as more standard media such as DMEM, Opti-MEM and even phosphate-buffered saline (PBS).

Transfection at small scale requires the pre-mixing of DNA and transfection reagent to form complexes that are incubated at room temperature for a given amount of time, usually within a short 15–30-minute window to prevent their aggregation and allow efficient binding to the cell membrane and subsequent endocytosis. Once formed, these transfection complexes are immediately added to the cell culture. The pre-mixing volume usually represents 10% of the cell culture volume, and at small scale it is manageable to quickly add this volume. When moving on to large scale transfection, it consequently leads to working with large volumes during preparation of transfection complexes and during their transfer into the bioreactor. The implementation of a transfection protocol compatible with upscaling is therefore indispensable to maintain high viral titer yields. FectoVIR®-AAV transfection reagent addresses both time and volume constraints of large-scale transfection. As shown in Figure 3 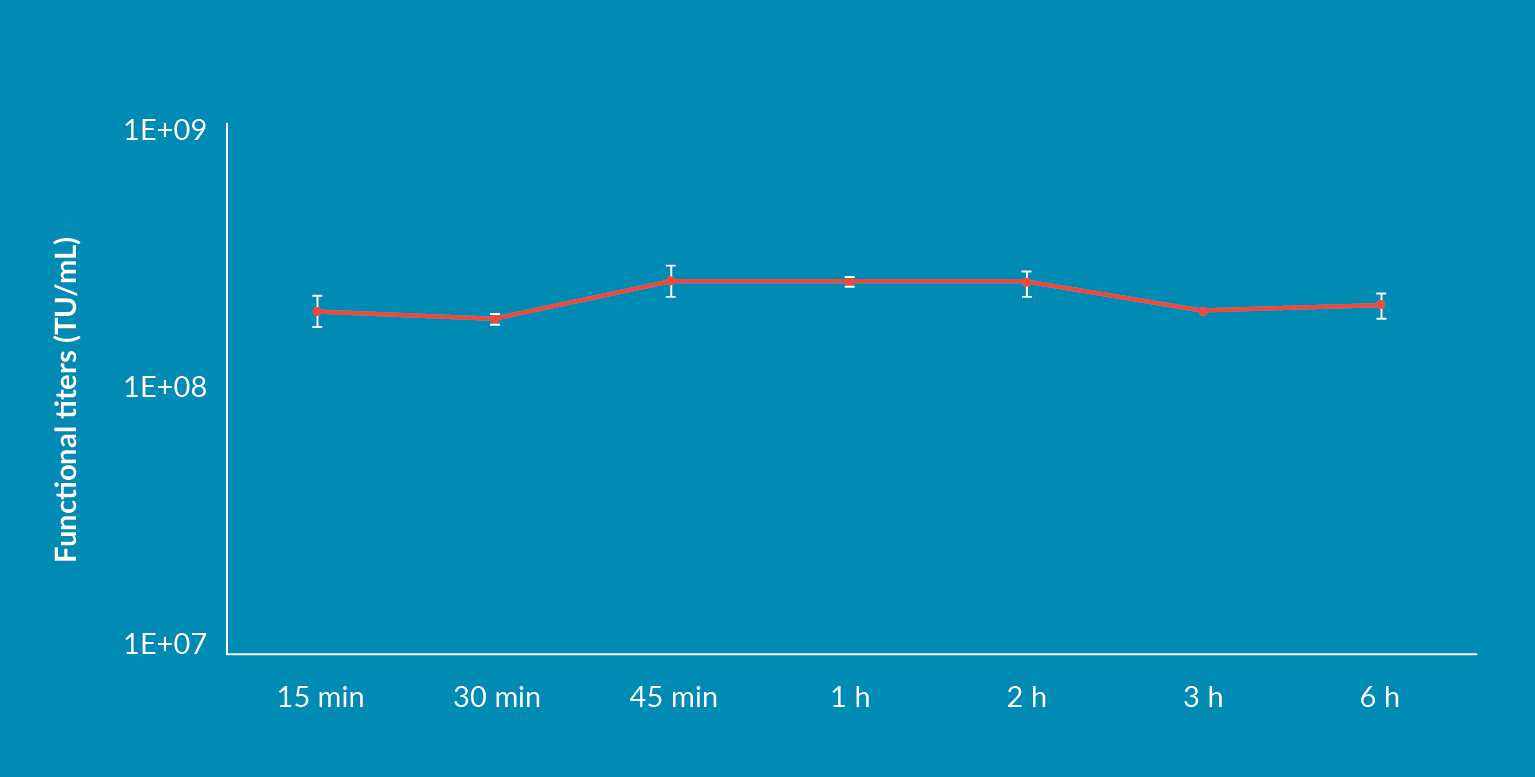 Long-term stability of FectoVIR®-AAV /DNA complexes for reliable titer yields at industrial scale.rAAV-2-GFP were harvested 72h post-transfection of suspension HEK-293T cells with FectoVIR®-AAV /DNA complexes prepared following the recommended conditions. With varying pre-incubation time of complexes (15 min to 6 h). Functional viral titers (TU/ml) of rAAV2-GFP were measured in an infectivity assay 72 h post-transduction of adherent HEK-293T cells., the transfer time is no longer a limiting factor. FectoVIR®-AAV transfection complexes are stable after 15 minutes of pre-mixing and remain as such for up to 6 hours, thereby ensuring reproducible AAV titer yields when transfection complexes are quickly added to the cells at small scale, or when 1 hour or more is needed to add these complexes for large scale transfection. FectoVIR®-AAV has also been optimized to reduce the complexation volume (Figure 4 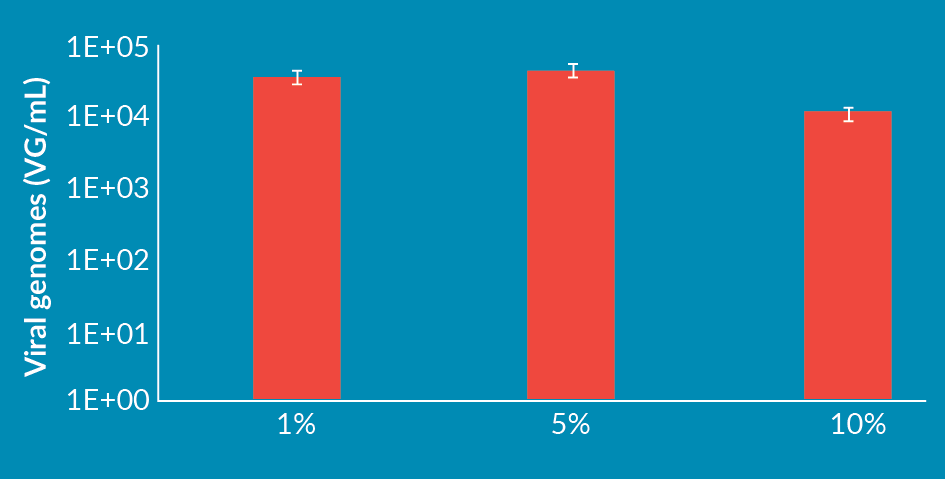 With the growing AAV manufacturing capacity demands, the need for novel technologies to aid viral manufacturers increase production is critical. It is also indispensable that all raw materials used for the production of therapeutic viral vectors meet quality requirements for future commercialization. Polyplus-transfection® has acquired a strong expertise in developing GMP grade transfection reagent, also recently marked by the launch of the first GMP compliant transfection reagent for therapeutic viral vector manufacturing (PEIpro®-GMP in 2018). The strategy for developing GMP-grade transfection reagent is a fully validated process in compliance with GMP guidelines to ensure traceability from starting material to the final product. Therefore, during initial identification of lead candidate FectoVIR-AAV®, we confirmed its GMP compatibility and the feasibility of its synthesis at large scale which now allows us to confirm that it will be commercially available starting Q2 2021, concomitantly with a residual test to ensure FectoVIR-AAV’s traceability throughout AAV manufacturing process.

Contributions: All named authors take responsibility for the integrity of the work as a whole, and have given their approval for this version to be published.

Funding declaration: The authors received no financial support for the research, authorship and/or publication of this article.

Copyright: Published by Cell and Gene Therapy Insights under Creative Commons License Deed CC BY NC ND 4.0 which allows anyone to copy, distribute, and transmit the article provided it is properly attributed in the manner specified below. No commercial use without permission.

Figure 1 Improvement in both viral genome production and packaging efficiency with FectoVIR®-AAV results in a up 10-fold increase in functional rAAV-2 production in comparison with competitors.

Figure 1 Improvement in both viral genome production and packaging efficiency with FectoVIR®-AAV results in a up 10-fold increase in functional rAAV-2 production in comparison with competitors.

Suspension HEK-293T cells were transfected with PEIMax, PEIpro® and FectoVIR®-AAV using the recommended conditions. rAAV-2-GFP were harvested 72 h post-transfection of suspension HEK-293T cells with FectoVIR®-AAV/DNA complexes prepared in several synthetic media. Functional viral titers (TU/ml) of rAAV2-GFP were measured in an infectivity assay 72 h post-transduction of adherent HEK-293T cells: a serial dilution of harvested rAAV2-GFP is used to infect a given number of adherent HEK-293T cells. Three days post-transfection, the number of GFP-positive cells is measured by flow cytometry.