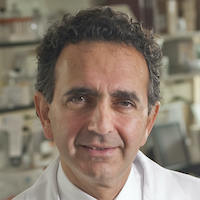 Anthony Atala, MD, is the G. Link Professor and Director of the Wake Forest Institute for Regenerative Medicine, and the W. Boyce Professor and Chair of the Department of Urology at Wake Forest University. His work focuses on growing human cells, tissues and organs. Fifteen applications of technologies developed in Dr Atala’s laboratory have been used clinically in human patients. Dr. Atala was elected to the Institute of Medicine of the National Academies of Sciences (now the National Academy of Medicine), to the National Academy of Inventors as a Charter Fellow, and to the American Institute for Medical and Biological Engineering. Dr Atala is a recipient of the US Congress funded Christopher Columbus Foundation Award, bestowed on a living American who is currently working on a discovery that will significantly affect society; the World Technology Award in Health and Medicine, for achieving significant and lasting progress; the Edison Science/Medical Award; the Fast Company World Changing Ideas Award; the R&D Innovator of the Year Award; and the Smithsonian Ingenuity Award. Dr Atala’s work was listed twice as Time Magazine’s top 10 medical breakthroughs of the year, and as one of 5 discoveries that will change the future of organ transplants. Dr Atala’s work was ranked in 2019 by the Project Management Institute as one of the top 10 most impactful biotech projects from the past 50 years. Dr Atala was named by Scientific American as one of the world’s most influential people in biotechnology, by U.S. News & World Report as one of 14 Pioneers of Medical Progress in the 21st Century, by Life Sciences Intellectual Property Review as one of 50 key influencers in the life sciences intellectual property arena, and by Nature Biotechnology as one of the top 10 translational researchers in the world. Dr Atala has led or served several national professional and government committees, including the National Institutes of Health working group on Cells and Developmental Biology, the National Institutes of Health Bioengineering Consortium, and the National Cancer Institute’s Advisory Board. He was a Founder of the Tissue Engineering Society, the Regenerative Medicine Society, the Regenerative Medicine Foundation, the Alliance for Regenerative Medicine, the Regenerative Medicine Development Organization, the Regenerative Medicine Manufacturing Society, and the Regenerative Medicine Manufacturing Consortium. Dr Atala works with several journals and serves in various roles, including Editor-in-Chief of: Stem Cells Translational Medicine; Therapeutic Advances in Urology; and BioPrinting. He is the editor of 25 books, has published more than 800 journal articles and has applied for or received over 250 national and international patents.