CRITICAL ROLE OF AUTOMATION IN THE MANUFACTURE OF CELL & GENE THERAPIES

Automation: what will the cell therapy laboratory of the future look like?

With the recent successes of CAR-T cell therapies there has been a renewed interest in bioprocessing and the manufacturing facilities required to meet the demands. Increasing the scale of any process has potential risks as well as rewards. While the drive to automation is clear, there is a lot of debate on the strategy. The decision on whether and when to automate a particular step can have long-term consequences on the therapies’ cost-of-goods (COGs) and their successes. Automating the most complex and error-prone steps of a process is thought to be the best alternative to manual processes. However, automation may not be possible or even recommended for all steps in a process. Here, we examine both the barriers and the advantages of automation. Additionally, a detailed discussion of automating the autologous CAR-T cell process will look at each step from collection to infusion, and discuss the current automation offerings and speculate on potential future process changes. Through application of process analytics, we can gain a deeper understanding of the processes’ consistency and tailor automation to fit the process. New potency assays will improve manufacturing processes and ensure the delivery of a safe and effective product. These advancements will then shape the cell therapy laboratory of our future.

What will the bioprocess manufacturing facilities of the future look like? To answer this question, we must firstly envision cell-based products as a mainstream therapeutic option – this then calls for the therapies to be both affordable and accessible. These two concepts will guide the strategy and therefore design of the manufacturing facility.

Firstly, the product must be affordable for public acceptance as a therapeutic option. With the recent FDA approval of CAR-T cell therapy Kymriah® (CTL019) from Novartis, and Yescarta® from Kite Pharma (a Gilead company), there has been much debate on what the cost of therapies should be. Unfortunately, there is a large discrepancy between the expected and actual selling price of a cell therapy [1]. The International Society of Cell Therapy (ISCT) subcommittee posted survey results that showed labor and materials to be an estimated average of 61% of the total COGs. In terms of constraints in manufacturing that were ‘rate limiting’ and contribute substantively to increased costs, respondents cited ‘lack of automation’ and ‘manpower’ ahead of regulatory concerns, materials, and testing [2].

Secondly, the product must be accessible to patients. An informed decision on manufacturing strategy – centralized versus decentralized, scale-up versus scale-out – will need to take into account their benefits and risks. For example, one of the biggest considerations for centralized manufacturing is cold chain logistics. Careful management of this process is required in order for the cellular product to maintain viability and functionality. Most survey respondents (55%) will utilize liquid nitrogen storage for their products in development and more than half will ship products in frozen form, and cold chain logistics were estimated to be averaged 7% of COGs; this significant cost thereby underscores the need for alternative, cheaper technologies [1]. On the other hand, some models will utilize decentralized manufacturing facilities which will reduce the need for cold chain logistics, but will place importance on product and process consistency between different sites. Then, the ease of process transfer becomes critical.

It has been suggested that the COGs for a particular process are essentially defined and locked in with the investigational new drug (IND) application [3]. It is therefore imperative to design the pre-clinical research with lean manufacturing in mind, to reduce the COGs at the commercial stage. The concept of lean manufacturing was introduced through the manufacturing success of Toyota [4] and has since been utilized in many industries [5–7]. The overarching idea is to scrutinize every activity within the manufacturing process and then eliminate any wasteful or non-value adding activities to achieve optimal use of facility space, labor and equipment [4]. Some examples of waste are: unnecessary motion due to poor facility design; underutilization of talent by wasting skilled labor resources on simple, manual processes; waste of materials and labor on defective products; overproduction that results in excess stock inventory; and performing processing and tests not necessarily required by the end customer [4]. Further discussion is outside the scope of this article, but the opinion of the authors is this: automating and closing the most complex and error-prone processes can possibly reduce much of this waste. Furthermore, the drive towards automation can clearly help enable process scalability and ease of transfer, but there is still debate on when automation should be adopted [8].

Here we will examine some of the barriers to automation as well as the potential advantages. Possible automation solutions for the various steps in the cell therapy manufacturing process of a CAR-T product will be examined. Current process solutions will be presented and potential solutions for the bioprocess lab of the future will be discussed.

The Catch 22 of cell process development for cell therapy is that to automate you need to have a process that can be automated. This usually requires a well understood process and a strategy for making the desired changes. In some cases, the first role of automation is to provide data to increase process understanding. As understanding increases, so should the ability to optimize and control a process. For example, cells destined for a clinical trial should be a consistent and uniform population. However, the cell expansion process inherently produces heterogeneity within the batch, most likely due to small differences in the cell microenvironment. Human factors are the largest contributor to these differences so automated solutions that reduce heterogeneity will by default improve product quality.

Current challenges to cell therapy manufacturing can be grouped into four areas: quality, scalability, sustainability and robustness of the supply chain and COGs [9].

Several aspects of cell therapy manufacturing will have an impact on product quality and COGs. Patient-specific cell therapies are much different than “off the shelf” therapies such as traditional biologics. Compared with processes for traditional biologics, autologous cell therapy manufacturing is very manual and labor intensive. By one estimate, there are three-times more hands-on operations than biologics manufacturing. Extrapolating from a current biologics manufacturing batch failure rate of 3%, one would expect at a minimum a 10% failure rate in cell therapy processes [10]. Such complex processes can be difficult to automate and optimize because when the “process is the product”, changes in the process can lead to comparability issues [11]. When switching from a manual platform to a single-use automated platform, care should be taken that the disposable bags and tubing sets do not introduce leachable substances or particulates to the product [12]. Leachable substances and extractables are not restricted to single-use disposables and can be present in almost every unit operation of a biomanufacturing process affecting product quality, stability, consistency and even patient safety [13,14].

Failure of a lot can be life threatening to the patient waiting for treatment which creates regulatory demands of regenerative medicine materials that are much greater than for molecular pharmaceuticals and much more rigorous than for most industries [15], consequently driving up the COGs. Regulatory requirements call for a separate batch record and lot release for each patient and parallel processing of multiple patient lots simultaneously, thereby limiting economies of scale.

There are many reasons to delay automation of a cell therapy process including the lack of suitable devices. Each process for the manufacture of CAR-T cells is unique. Current hardware solutions offer poor compatibility especially when it comes to single-use disposables. Likewise, a software platform capable of interacting and controlling all the devices in a process does not exist [16]. These complex processes will require new hardware designs to match the unit operations. Custom hardware will be costly and may require change as process understanding increases [17].

The challenge of automation is how much of the process can be standardized and which parts need to be customized. This includes not just the available hardware, but also there must be a plan to deal with the patient. Most processes are developed with healthy donors. Later, when the researcher has access to patient material the process can be standardized to meet critical quality attributes. Obviously, keeping most of the process standardized and using custom procedures only when needed is one way to control costs [15].

Regardless of one’s overall strategy for commercialization, COGs will be both a driver and a barrier of automation. Increased reliability, consistency and reduced manufacturing costs are on the plus side of the equation and capital expense, lack of suitable equipment and lack of experience are on the minus side [3].

Automation can reduce or eliminate the number of open operations to mitigate the risk of microbial contamination. For cell therapy processes, this is particularly important as the final product/cells cannot be filter sterilized [17]. Microbial contamination and other product non-compliance also contributes to COGs when the cell product is lost. Each manufacturing unit must be capable of processing each individual patient’s cells [20]. The ability of automated systems to sense the culture conditions and respond to the different condition of each patient’s cell health can greatly benefit autologous therapies.

One of the first steps of any automation campaign should be to define the lot size and the desired characteristics of the final product. Next, automation of a manual process requires defining the individual unit operations. This will drive the equipment usage, scale of automation and quality control testing that will be required [17]. Process mapping to create a process flow diagram plus information from real time process monitoring (process analytical technologies: PAT), as well as an understanding of critical quality attributes can reduce the risk of comparability problems with the automated process [17]. Process mapping and knowledge gained from PAT can define which existing equipment can meet a users’ needs rather than allowing the equipment to define the process. Finally, an automation campaign should be stage dependent and plans must be flexible to change as the product moves toward the clinic.

Decentralized manufacturing (as mentioned above) is supported by the fact that less skilled workers can perform automated processes, allowing workers to be at different manufacturing sites and yet perform the same process.

The risk of scale-out of autologous processes is somewhat ameliorated by physically connecting and automating these complex manufacturing steps [21]. Two examples of the all-in-one solution for autologous manufacturing include the CliniMACS Prodigy® (Miltenyi Biotec) and the Cocoon™ (Octane/Lonza), which are described in a later section.

Although automation is usually considered a financial drain, calculated payback timelines for automation versus manual processing are eight to 25 months with the greatest benefit being seen when patient pools reach 1000 patients [22]. In fact, a partially automated process is more flexible and cheaper than a fully automated process especially when increased production is required [23]. 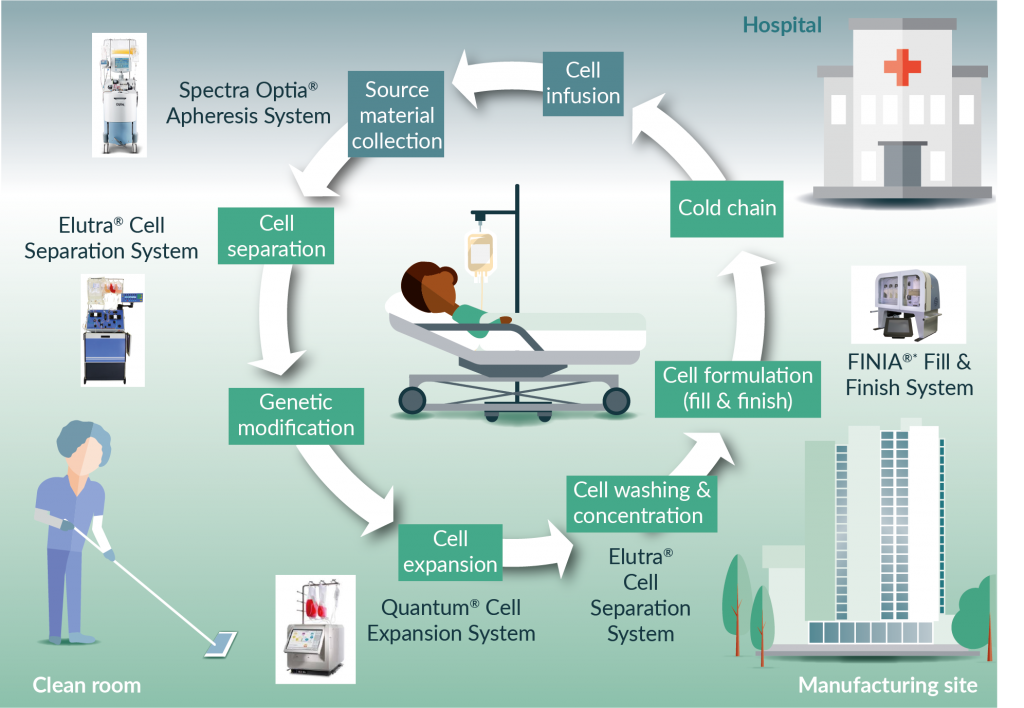 In broad terms there are four types of automation [11]: